Novel Bytes
Data's Apple Pie
Ok, so maybe not the most interesting of blog topics, but I do have a recipe I created! 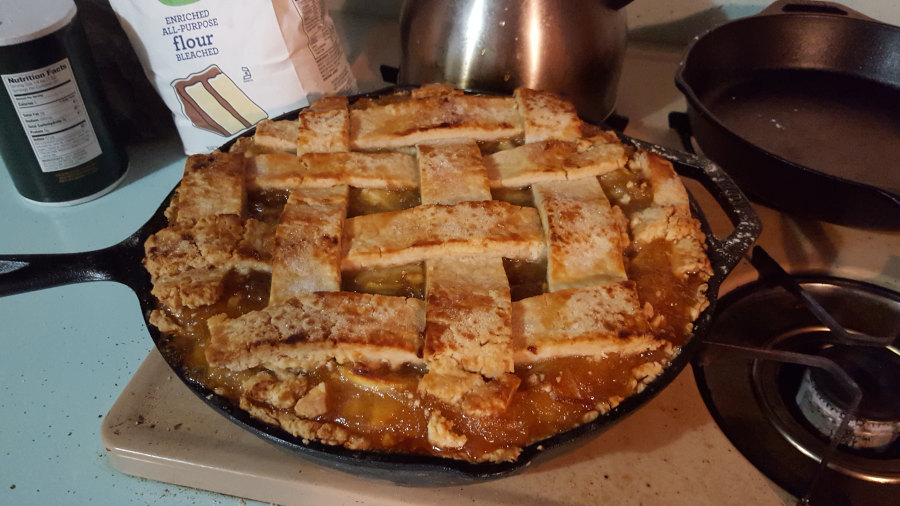 I have a habit of starting hobbies, diving head-first into them for a few months, then abandoning them to do something else. I still have three sewing machines and a small mountain of cloth and polyfill from my excursion into plushie crafting. (Spoiler, I didn’t get very far). I have had an interest in baking since my younger years, and even though I don’t do it often I do still enjoy it once in a while. This particular apple pie recipe got its start back in 2011, and I’d break it out every few years to have another go at it.

The goal of the pie was fairly simple: design an apple pie that was safe against my sister’s lengthy list of food allergies, but also be succulent and avoid the “cardboard” texture you can expect from typical allergen-free foods. Oh, and I wanted to cook it in an iron skillet. I had to get a little creative at first but the pie quickly took on its own unique qualities. I have had several people declare it to be the best apple pie they’ve ever had, with its unique flavor, texture, and just all around melt-in-your-mouth goodness. I also took this pie (the one in the picture, to be exact) to the baking competition at Ciderfest 2016 and won best in show - with a complement from John de Lancie to boot! You know, that guy that voices Discord in MLP, portrayed Q in Star Trek. That guy.

Allergens: Soy, Coconut (Optional), Gluten (You can get special flour to avoid that)
Friendly to Allergies: Corn, Milk, Eggs

This pie is an exercise in patience, but I promise you it’s worth it in the end. You will need a sharp knife and the wherewithal to use it in such a way to not cut your own fingers. Trust me on this one - you will have a lot of apples to cut. A dull knife is much easier to hurt yourself with while skinning, but that doesn’t mean a sharp knife is safe.

Now we make the crust. The bottom part goes in fairly easy once rolled out as the shortening in the crust is pretty forgiving. Roll out one of the crust halves until it is wider than the skillet plus double the wall height - you want the crust to fill all of the skillet so that the apples can’t get out of the crust while baking. Make sure to flip the crust routinely while rolling and make sure there’s always a thin dusting of flour under it. I normally also use the rolling pin to transfer the crust from the working surface to the skillet - just carefully roll the crust onto the pin, then unroll it onto the pan and gently mold and press it to the edges. If you crack the crust, gently rub the surface while pressing the edges together to get a seal - don’t press hard or you’ll make it too thin. Once the crust is in the skillet, use a knife to trim off any bits that stick over the top.

Now add the pie filling! Now is also a good time to start the oven preheat, as it should be up to temp by the time we’re done with the top crust. Preheat the oven to 380F.

The top is quite a bit harder to do if you do it with a lattice like what I have shown, but I’ll give you a little secret: Start with the middle pieces, use a rolling pin whenever possible for bending back bits to work on, and if things break, they’re fine and you can re-mold them without re-rolling them. Also, broken strips aren’t noticeable if the break is under another strip.

Sprinkle with a little bit of white sugar, and bake at 380F for an hour. The crust should change to a light golden color.

And that’s it! Make sure to let it cool for at least an hour before serving, although it’s probably best after about two hours. If you want to cook it later, the pie can be refrigerated without issue for two days or frozen for six months (although it won’t taste as good after freezing it). If you freeze it, add about 30 minutes to the bake time. After baking, the pie will keep pretty well for about a week if kept covered and refrigerated, or about ten minutes if left uncovered on my kitchen table. *poof* gone.

Seriously, transcribing my notes into a blog made me hungry for pie.